Pindeldyboz Lit Mag, which published my first short story, just announced that it is shutting down. I remain grateful. Here's a copy while its available for the sake of creating an archive. If you'd like to read it, it's short!

NaNoWriMo - It's the most wonderful time of the year

Years ago, one of my student/workshop participants introduced me to an internet site where writers unite annually, virtually, and challenge themselves to churn out 50,000 words, or a so-called "novel" in 30 days. Each. (The industry standard is actually closer to 90,000 words or more.) While I have never been successful in churning out 50,000 words in a given month (I've participated since 2005 but have never "won") this is in fact how the novel I am currently revising was born. (Hats off to the many accomplished authors who have actually gone on to publish their NaNo novels. For a list, visit the site - address coming right up below. They include Sara Gruen, as well as others you'll recognize.) The sponsors of NaNoWriMo (at http://www.nanowrimo.org) suggest "Novel writing is mostly a "one day" event…As in "One day, I'd like to write a novel."

The structure of NaNoWriMo - a "contest" of will, with the set goal of churning out 50K words in a month - "forces writers to put away self-defeating worries and START." It's about quantity, not quality at the outset. In other words, put pen to paper November first, and you'll be on the road to writing a novel!

NaNoWriMo got this writer to stop dreaming about that whale of a tale and actually begin writing it. I found it encouraging to know several thousand other people were attempting this feat at the same time. I felt less isolated as I worked. The change in my writing habits was monumental, as was the momentum achieved while driving to meet the communally imposed goal by month's end (the NaNo deadline). NaNoWriMo's lofty goal drove the procrastinator in me into submission as I shifted into high gear. As December rolled in, I found myself unable to stop.

I'm still at it. Only now instead of churning garbage out as quickly as possible, I'm rewriting, culling my NaNo crop and generating new material - a process I call "writing up and writing down" - a phrase that reveals how much my motivation remains tied to word count. I track my progress by monitoring my manuscript document's word count: lowering it while cutting (hopefully improving quality) and raising it again as I replace gutted material with new scenes, sentences and dialogue. As they say, whatever works. For me, this does.

One shortcoming discovered while writing "stream of conscious" - I wrote multiple versions of the same scene, idea, memory or swatch of dialogue throughout my NaNo exercise. I've since found the embedded Find, Replace, Go To tool in Microsoft Word a Godsend. (And that's all I have to say about that.)

Writing is an iterative process - though perhaps not necessarily this iterative. I'd be happy to hear ideas about writing from an outline or another approach to avoid this pitfall the NEXT TIME I set out to write a novel. In the meantime, I'm grateful to NaNoWriMo for giving me a jumpstart. 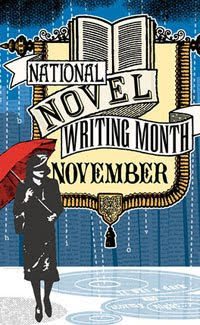 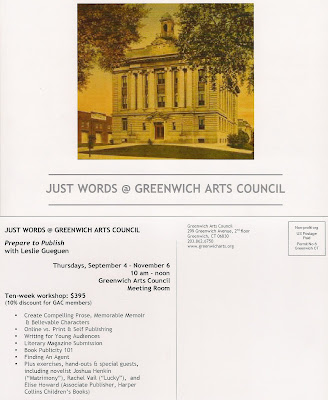 Information about past programs produced at the Greenwich Arts Council. In the coming weeks, I'll distill advice shared by our distinguished guests and post it. 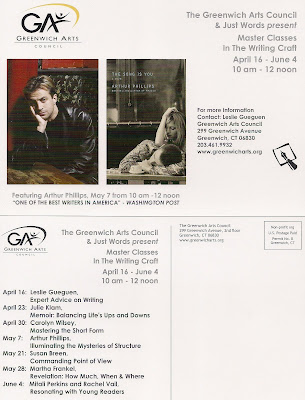 Posted by JUST WORDS at 4:39 AM No comments: 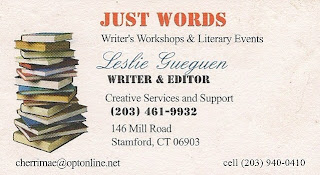 Just Words began as a writer's workshop at independent bookstore Just Books, expanded to include open mic and book signing events at Arcadia Coffee, and, more recently Master Classes in Writing, featuring publishing industry executives, agents and guest authors at the Greenwich Arts Council. I am always looking for new release info (and ARCs) for future events, and will pass along info to other local venues in my network. Please send ARCs to the snail mail address; use the bold type to reach me - a very late adopter of technology - for someone who spent 15 years promoting tech companies - I rarely charge the cell.
Posted by JUST WORDS at 6:55 PM No comments:

Back by popular demand: Just Words, the workshop I founded over five years ago to support writers with work in progress, will resume Monday evenings October 5 - November 23 at Just Books, Old Greenwich, CT from 7 - 9 p.m. The workshop has been on summer hiatus while I worked on the second draft of my novel in progress.
Posted by JUST WORDS at 4:29 PM No comments: 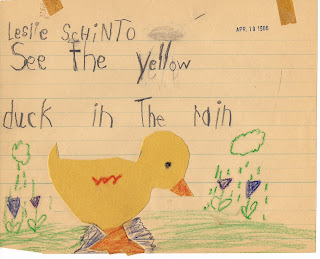 Posted by JUST WORDS at 3:46 PM No comments:

And may all your rejection letters be kind

Some rejection letters are helpful. One led me to revise a story that was later published. This wasn't too hard to take:

From: submissions@tearsofthephoenixink.org
To: "Leslie Gueguen"
Sent: Wednesday, July 29, 2009 12:13 AM
Subject: Regarding your submission
Ms. Gueguen--Firstly, let me thank you for your amazing patience with us and this project. We have been trying for a very long time to find quality stories like yours for this anthology. Unfortunately, we were unsuccessful and are sadly going to have to put this project away indefinitely. I am so sorry to have kept you waiting so long and urge you to try to get this wonderful story in other publications. Sincerely, Tamela J. Ritter
Posted by JUST WORDS at 10:36 AM No comments: